The European Democratic Party organised the "Happy 18 Polsko - Solutions for Europe" event in Krakow to celebrate Poland’s 18 years of membership in the European Union.

The Secretary-General of the European Democratic Party (EDP) and MEP, Sandro Gozi, said on Friday 6 May in Kraków: "Eighteen years have passed since Poland joined the European Union. Its membership gave a strong impetus to the country's economic growth and brought visible improvements to the daily lives of the Polish people. Unfortunately, like other European countries, Poland, in recent years, has suffered from 'democratic regressions' by Eurosceptic governments. The current Polish government has systematically violated fundamental rights and the rule of law, in contrast to the great proof of humanity and solidarity that the Polish people are giving to our Ukrainian brothers and sisters. But I am confident that this phase will pass and that Poland will return to the centre of Europe: 80 per cent of Poles support membership in the EU, a figure well above the average for all member states, and last year hundreds of thousands of people in Warsaw showed their pro-European views."

Róża Thun, MEP for Poland, Polska 2050, “This 18th anniversary is a bit bittersweet as well, or even just bitter because we were wasting everything that we could for the past seven years (…) we were wasting everything we could do for Europe and gain from this community because we are a member. In the field of democratic progress, to be in the rule of law implantation of community law, educating young people, educating everyone to live in a country that maintains the three branches of government. These last seven years should have been huge progress for our civilisations, and we had opportunities, but they were wasted, and I say this with great pain because this 18th anniversary is bitter. But seeing you and seeing our guests, I am full of hope that in the upcoming future, this is going to change, and we will be able to carry out our tasks in the European Union for our good and the good of the EU as it comes for someone who is mature at the age of 18.”

Overall, the event comprised four discussion panels ranging from Poland's 18 years of membership in the European Union to Citizens at the centre of politics, Green transformation and Europe's place in the world after Russia's aggression against Ukraine. The event, which gathered various representatives of circles of politics – amongst them, a representative of our Czech member Senator 21, NGOs, and local activists, was to propose concrete solutions to help the local community adjust their activities to the current socio-economic challenges.

The following “Solutions for Europe” will be in Brno, Czechia.

or browse photos of the event 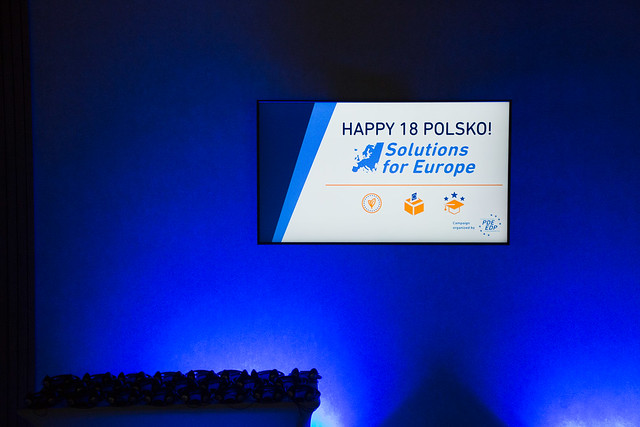 END_OF_DOCUMENT_TOKEN_TO_BE_REPLACED

The "Solutions for Europe" series of meetings will highlight the concrete solutions and ideas developed in our European territories to respond to today’s democratic, economic, social and educational challenges.

END_OF_DOCUMENT_TOKEN_TO_BE_REPLACED

Protecting the Ocean is protecting Humanity

END_OF_DOCUMENT_TOKEN_TO_BE_REPLACED

Improving the inclusion measures of the Erasmus + programme